The British public had been notified of the armistice by the Prime minister, David Lloyd George, at 10.20am on 11 November 1918, "The armistice was signed at five o'clock this morning, and hostilities are to cease on all fronts at 11 a.m. to-day".

A report from the following day's Times newspaper noted that people instantly took to the streets. In London: ‘buses converted themselves into moving grandstands. Motor cars came along with people sticking to every inch of them, like flies to treacle.'

The article goes on to record streets full of people of all nationalities and ages, military and civilian, dancing and waving flags, church bells ringing and maroons (rockets which created a loud warning bang and bright flash and were used by British spotters in World War I), booming.

'Armistice Day' gives a literal overview of this activity. Painted from an upper story window in St George's hospital, now the Lanesborough Hotel, it shows the Wellington Arch at Hyde Park Corner in central London, (prior to the re-routing of roadways which created the island the arch currently stands on.)  Lavery has used the traffic, every vehicle apparently driving in a different direction, and the pedestrians wandering among them to show the spontaneous and anarchic nature of the celebrations. 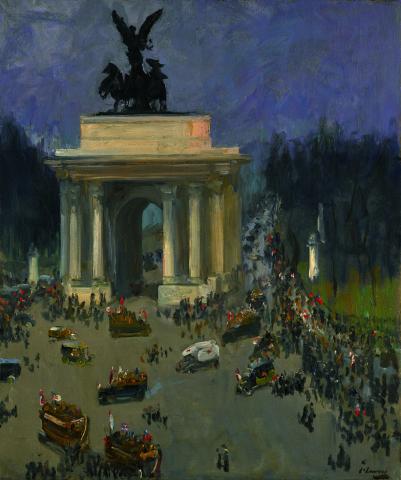