One of just three prototypes, the Triumph TR2 is a handmade prototype, developed as a part of The Standard Motor Company, Coventry’s programme to find a successor to their Triumph Roadster by making a ‘true’ sports car.

In May 1953 SMC’s test driver and a part of the British Racing Motors (BRM) Formula One team, Ken Richardson, drove this MVC575 in a speed trial at Jabbeke in Belgium reaching a speed of just over 125 miles per hour – a record for a two-litre car at the time – and provided invaluable publicity for the Triumph marque.

The car will be displayed in the context of four other British built vehicles that have also broken speed records. In addition to exhibiting the car, the Trust will also use it as a resource for activities such as their Community Engagement, adult learning, schools, families and Saturday Club programmes.

Its construction differs widely from any other Triumph as it is built around a wooden frame and only has one seat, no windscreen and the bodywork is riveted together rather than welded.

Even the Triumph badge on the bonnet is unique to this particular car.  It was not designed and built specifically to be a ‘record breaker’, but as the basis for a production model. 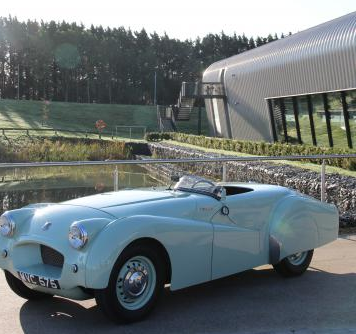