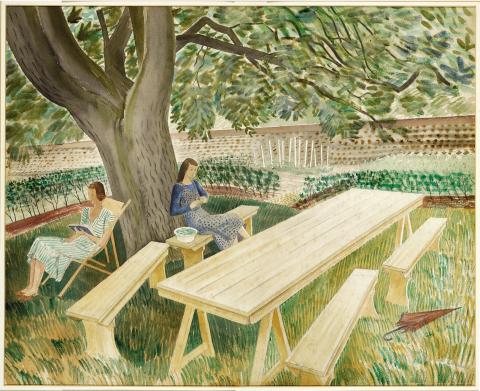 Two Women in a Garden

The Fry Art Gallery, Saffron Walden has acquired the watercolour “Two Women in a Garden”, a rare early work by Eric Ravilious, one of the 20th century’s most important and influential artists.

The painting depicts artist Edward Bawden’s wife Charlotte with Eric Ravilious’s wife Tirzah in the garden of Brick House, Great Bardfield around 1933, where the two couples lived. It is at Great Bardfield where the artists set about ‘reviving the art of English watercolour’ and the house became the centre for the artists collectively known as the Great Bardfield Artists. The movement peaked in the 1950s. The painting offers a rare glimpse of Ravilious’s domestic life and also shows the beginnings of his highly distinctive style.

The painting has been on loan to the gallery for a number of years and will now become a key piece in the gallery’s North West Essex Collection. The purchase was made possible by £130,000 from the National Heritage Memorial Fund (NHMF) along with further funding from the Arts Council England/V&A Purchase Grant Fund and a contribution from the gallery’s own resources.

Born in London, Ravilious was a painter, designer, book illustrator and wood engraver. He studied at the Eastbourne School of Art, where his early talent was recognised. He was awarded a place in the Design School at the Royal College of Art (RCA), where he studied under Paul Nash, and met fellow students with whom he would form lasting personal and professional relationships, including Edward Bawden, Douglas Percy Bliss, Barnett Freedman, Helen Binyon, Enid Marx and Peggy Angus.

After the RCA he returned to Eastbourne to teach at the School of Art where in 1930 he married one of his students, the talented artist and engraver Eileen Lucy "Tirzah" Garwood. Ravilious was appointed an official war artist in Second World War and received a commission as a Captain in the Royal Marines. He was killed in 1942 at the age of 39 while accompanying a Royal Air Force air sea rescue mission off Iceland that failed to return to its base.

Sir Peter Luff, Chair of NHMF, said: “Eric Ravilious is one of the most significant British water-colourists of the 20th century. Perhaps most widely known for his work as a Second World War artist, Two Women in the Garden is a rare early work that offers valuable insight into Ravilious’s family life. It also signals the beginning of his distinctive style, for which he remains enduringly popular. Having been on long-term loan to the Fry Art Gallery, when it came up for sale the trustees of the National Heritage Memorial Fund agreed it was important that it remain on public display and stepped in to help the gallery secure it.”

David Oelman, Chairman of the Fry Art Gallery said: “This early watercolour demonstrates Ravilious’s attention to detail and his keen observational facility with two people who are recognisably depicted even if they are not named in the title. The picture should be seen in the context of the Bardfield artists and the artistic development of the period in Britain. This picture is pivotal in the lives of these artists and at the very heart of the Fry Art Gallery collection”

This private treaty sale, a Government scheme which encourages owners of important heritage assets to sell them to Museums and Galleries, was facilitated by Uttlesford District Council as intermediary, whose assistance was essential.

The National Heritage Memorial Fund (NHMF) was set up in 1980 to save the most outstanding parts of our national heritage, in memory of those who have given their lives for the UK. It will receive £5 million of Government grant in aid in 2018/19 www.nhmf.org.uk.

About The Fry Art Gallery

The Fry Art Gallery is home to the North West Essex Collection of paintings, prints, books and ceramics by artists who have lived in and around Great Bardfield and Saffron Walden and have made a national contribution in their field. The gallery was opened in 1987 and houses an impressive number of paintings, prints, illustrations, wallpapers and decorative designs by artists of the 20th century and the present day, including Edward Bawden RA, Eric Ravilious, John Aldridge RA and Michael Rothenstein RA. www.fryartgallery.org