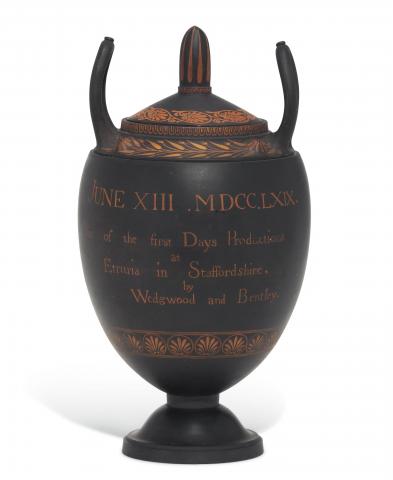 Stoke-on-Trent City Council and the Friends of the Potteries Museum & Art Gallery have managed to raise the £482,500 purchase price to keep Wedgwood’s First Day’s Vase in the city after it was sold at auction to an oversees buyer. A temporary export bar was placed on it by the Government in December, which was extended until July 14.

The National Heritage Memorial Fund (NHMF) has stepped in with a grant of up to £267,500 in order to make up the shortfall in the fundraising campaign, which has seen donations from hundreds of members of the public, major support from funding bodies including Art Fund and Arts Council/V&A Purchase Grant Fund, and local businesses since its launch earlier this year.

The fundraising target was reached during the week of the 248th anniversary of the vase being made by Josiah Wedgwood’s own hands on the opening day of his factory at Etruria on June 13, 1769.

Since then, Stoke-on-Trent City Council has been in discussions with the buyer to purchase this iconic piece of history and put it back on display at the city centre museum. The offer has now been accepted and arrangements are being made for its return.

Sir Peter Luff, chair of NHMF, said: “A pioneer of the industrial revolution, Josiah Wedgwood remains one of the most significant names in UK ceramics and British industry more widely.

“This incredibly rare vase, thrown by Wedgwood himself, is of exceptional importance to our national heritage. That is why the National Heritage Memorial Fund is so pleased to have been able to step up and help keep the vase in the UK where it was created.”

Ian Lawley, chairman of Friends of the Museum, said: “This is great news, not just for Stoke-on-Trent but for the nation. The support of major funding bodies such as the National Heritage Memorial Fund has been crucial in meeting our target and reflects the historical importance of this iconic vase.

“But we would also like to thank the hundreds of individual donors who have contributed to the appeal. Their generosity has been extraordinary and shows just how much people value their cultural heritage. We would never have been able to save the vase from leaving the UK without the public’s support.”

The First Day’s Vase had been on loan to the Potteries Museum & Art Gallery for 35 years until it was withdrawn by its owner and sold at auction to an overseas buyer last year.

It is one of only four made by Wedgwood that survives from the first day at Etruria. Wedgwood, who was one of the pioneers of the industrial revolution, treasured the vases and said they should not be sold. Two of the other vases are owned by the Victoria and Albert Museum while the third remains in the Wedgwood family.

The vase is inspired by ancient Greek pottery from the collection of Wedgwood’s friend Lord Hamilton, and is believed to have been painted by William Hopkins Craft. The Etruria factory was the result of a partnership between Wedgwood and Thomas Bentley and remained in operation for 180 years until the company moved to its present location at Barlaston.

Councillor Anthony Munday, the city council’s cabinet member for greener city, development and leisure, said: “It is absolutely fantastic news that we have been able to buy the vase, and ensure it can be put back on display in Stoke-on-Trent.

“We’d like to say a huge thank you to everyone who has donated towards this very worthy cause. The support from major fundraising bodies, businesses and the public has been incredible and we couldn’t have done it without them. Also, a special thank you to The Friends of The Potteries Museums & Art Gallery, whose work continues to be invaluable.”

The city council is currently leading a bid for Stoke-on-Trent to become the UK’s City of Culture 2021, supported by a huge range of businesses, educational establishments, public sector partners, voluntary groups and arts and culture organisations.

Councillor Abi Brown, deputy leader of the city council and chair for the UK City of Culture bid, said: “We have been overwhelmed by the generosity shown by so many people since the campaign to save the vase was launched.

“We are now one step closer to bringing it back to Stoke-on-Trent – and ensuring an important part of our city’s culture and heritage remains freely accessible for all to see and admire.”

Stephen Deuchar, Art Fund director, said: “The national passion for Wedgwood was clear to all when we ran the public appeal in 2014 to save the priceless historic collection at the Barlaston factory from being split up.

“Now we are delighted to have supported the nearby Potteries Museum & Art Gallery in its successful effort to procure one of the very few First Day’s Vases made –rightly export-stopped by the Minister – so that it can remain here in the UK as a vital part of the national as well as local heritage.”

More details about when the vase will return to the Potteries Museum & Art Gallery will be released at a later date.