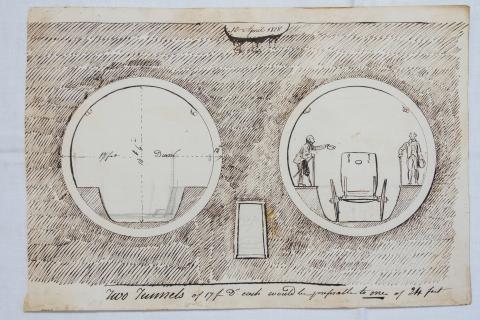 The objects, which include pen and ink drawings and watercolour designs of the Thames Tunnel, were secured at auction with help from grants totaling £203,909 from the government-funded National Heritage Memorial Fund (NHMF).

At risk of being sold abroad, all the items were purchased at Bonhams’ Fine Books, Atlases, Manuscripts and Photographs sale in November having previously been held in family archives for over a century.

The SS Great Britain Trust purchased the archive of some 40 outstanding plans, diaries, drawings and photographs, including a watercolour design for Sir Marc’s steam-powered sawmill at the Royal Naval Dockyard at Chatham which was installed in 1812-13 and depicts just two attendants in a mill operating eight timber-cutting saws. This design, along with a selection of others acquired, will be publicly displayed for the first time when Being Brunel – the new national Brunel museum – opens at the end of March 2018 alongside the SS Great Britain in Bristol.

The Brunel Museum, in Rotherhithe, London, acquired an album of 30 beautiful drawings which show - in exquisite detail - plans for what was to be the biggest and most famous construction site in the world. When the Tunnel opened in 1843 it was dubbed the Eighth Wonder of the World, but along the way there was disaster and heroism. The drawings show a daring young Brunel first in a diving bell and then in a boat inside the tunnel inspecting the damage by lantern light.

Marc Isambard Brunel (1769 –1849), was a French-born engineer who settled in England. His most famous achievement was the construction of the Thames Tunnel or Triumphant Bore, an engineering first which continues to change the lives of Londoners and the shape of cities and the lives of city dwellers all over the world.

The Tunnel was made possible by an invention Brunel called the Miners’ Cage or Tunnel Boring Machine (TBM), which was patented in 1818. The TBM supports the unstable excavating face and protects the miners, while bricklayers working behind them build the walls.

The Thames Tunnel is the birthplace of the tube system, of mass urban transport, and is Marc Brunel’s most enduring claim to fame, although his fame is often eclipsed by his famous son Isambard Kingdom Brunel.

Sir Peter Luff, Chair of NHMF, said: “An innovator whose expertise and knowledge shaped the landscape of our nation, Sir Marc Brunel’s achievements deserve to be better known.  By stepping in to help the SS Great Britain Trust and the Brunel Museum secure these pieces of Brunel’s archive, the National Heritage Memorial Fund is ensuring his legacy is explored and shared more widely.”

Robert Hulse, Director of The Brunel Museum in London said: “Securing the Thames Tunnel Archive is one of the most important moments in the history of the Museum. A hundred and ninety years ago, here in the Thames Tunnel, we half drowned Isambard Kingdom Brunel. But we also launched him. This is his first project, and today, Brunel’s drawing pad is our launch pad for a major building programme: a new gallery and a new museum for these beautiful drawings. A Scheduled Ancient Monument that tells a very modern story.”

Rhian Tritton, Director of Interpretation, Collections and Education at the SS Great Britain Trust said: “The watercolour design for Sir Marc’s steam-powered sawmill illustrates beautifully the high noon of the industrial revolution and the emerging era of mass production. It is one of a magnificent archive of drawings and designs that speak volumes about Sir Marc’s talent for invention.

“Perhaps most revealing is the series of drawings we acquired for the Brunel Institute relating to Sir Marc’s time in the United States in the late 1700s, surveying the navigation of the Mohawk River. Until now there has been very limited information relating to this period in Sir Marc’s life, so it’s fantastic to be able to expand our understanding in this way.”

About Brunel’s SS Great Britain and Being Brunel

At the end of March 2018, Being Brunel will open to the public - a new national museum telling Isambard Kingdom Brunel’s extraordinary story through never-before-seen personal possessions, as well as interactive exhibits and audio-visual experiences. The new museum is located alongside the SS Great Britain at her home in the Great Western Dockyard, Bristol. For more information visit www.ssgreatbritain.org

About The Brunel Museum and the Brunel dynasty

There is more Brunel in London than in Bristol, and The Brunel Museum celebrates three generations of extraordinary engineers who helped shape our city. Marc Brunel's Thames Tunnel is the oldest tunnel in the London Underground and Isambard Kingdom Brunel’s first project. IK Brunel's last project, launched on the Isle of Dogs, is the SS Great Eastern: first bulk carrier, ancestor of the super tanker, trans Atlantic cable layer and the ship that changed everything. Tower Bridge, one of the most famous bridges in the world, was built by son and grandson Henry Marc Brunel, with his business partner John Wolfe Barry.

London’s Brunel Museum is a small museum with a big story. The Trustees and Museum Director lead a team of volunteers who staff the Museum and help run a busy programme of community and education events. They hope this Archive of exceptional drawings in a dramatic new gallery space will draw more people to this little known but internationally important site.

Brunel is not engineering in aspic. All good engineers offer accessible answers to important challenges. The Museum’s aim is to entertain as well as educate, and bring new audiences, as well as enthusiasts, to a greater understanding of the Brunels as daring engineers with radical solutions. For more information visit www.brunel-museum.org.uk