After 50 years of uncertainty and having fallen into a perilous state-of-disrepair, the future of one of Wales’s most important and fairytale-like country houses, that was set to become a royal residence, is now secure. 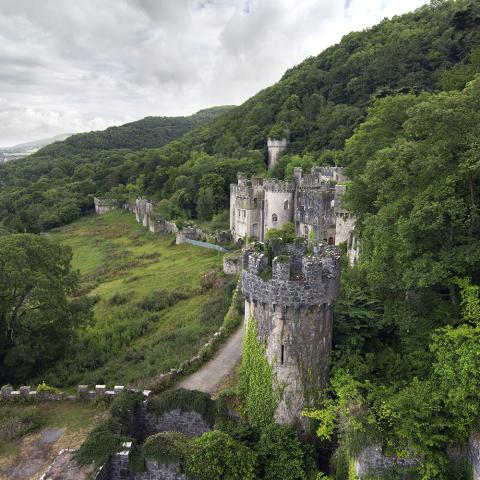 The Grade I Iisted Gwrych Castle, Abergele in North Wales has been purchased by the Gwrych Castle Preservation Trust after the UK government-funded National Heritage Memorial Fund (NHMF) stepped in with the final piece of the financial jigsaw. NHMF has given a grant of £600,000 in addition to a major grant from the Richard Broyd Charitable Trust, which has enabled the purchase to go ahead.

Gwrych Castle has a rich and diverse history, with direct links to the British royal family. It was built by Lloyd Hesketh Bamford-Hesketh between 1810 and 1822 incorporating his ancestral home. The castle was the largest newly built structure of the nineteenth century and was designed by several prominent architects including CA Busby, George Edmund Street and Thomas Rickman - major figures in the Gothic Revival movement.

The frontage stretches for over 1500 feet and contains eighteen battlemented towers, with expansive views over the parkland towards the Irish Sea. The main house is believed to have had 120 rooms, with a run of formal rooms on a piano nobile, centring on the spectacular, marble staircase, designed by Arts and Crafts architect, Detmar Blow in 1914. The castle and its setting is considered one of the finest examples of picturesque architecture in Britain.

It passed to Lloyd’s granddaughter, Winifred, Countess of Dundonald in 1894. When she died in 1924, she left the castle in her will to King George V and the then Prince of Wales (who later became King Edward VIII).  It was the intention that Gwrych would become the family’s royal residence in Wales, however the gift was refused on the grounds of the economic downturn of the 1920s. The castle passed to the newly disestablished Church in Wales before being purchased in 1928 by the countess’s estranged husband, Douglas, 12th Earl of Dundonald.

During the Second World War, the castle housed 200 Jewish refugee children as part of Operation Kindertransport. After the war the castle opened to the public as one of the first country houses in Britain to do so. It was used as a training venue for the English World Middleweight boxing champion Randolph Turpin in the early 1950s. During the 1970s, the castle was used as a medieval entertainment centre and was the first themed attraction of its kind in Britain.

The doors of the castle closed to the public in 1985 and it started to decline. It was bought in 1989 by an American businessman but sadly plans to renovate the building didn’t progress. The castle was extensively looted and vandalised, reduced to a derelict shell. It was used as the backdrop to the 1996 film Prince Valiant, starring Edward Fox, Joanna Lumley and Katherine Heigl.

Sir Peter Luff, Chair of NHMF, said: “Gwrych Castle is enchanting, even in its sadly reduced state. The vision of Gwrych Castle Preservation Trust to restore this spectacular building with a rich history and to open it again is inspiring.  All of us at the National Heritage Memorial Fund felt compelled to support their ambition.”

Mark Baker, Chair of Gwrych Castle Preservation Trust, said:  “As a child, I would pass the castle everyday to and from school, and at the age of eleven founded the castle trust. Now twenty-one years later, we are in a position to purchase and realise that vision. A huge vote of thanks must go to the National Heritage Memorial Fund and the Richard Broyd Charitable Trust for believing in our vision.”

Marcus Binney, Executive President at SAVE Britain’s Heritage, said: “Gwrych castle has been in serious danger for 40 years and has appeared in numerous SAVE reports on threatened historic buildings in need of new owners and new uses.  We have supported and encouraged Mark Baker since he first took an interest in the Castle aged 12. The acquisition of the castle by his preservation trust shows that determination, patience and resourceful thinking can save and revive great houses that have been in desperate straits for decades

“SAVE offers special thanks to NHMF for the rapid way they have responded to this crisis - on the model of their previous support for so many earlier famous and brilliant historic house rescues including Tyntesfield, Dumfries House and most recently Wentworth Woodhouse.”

The castle and grounds are currently open daily for visitors but sections of the main building are closed due to its derelict state. The Gwrych Castle Preservation Trust will now set out plans to renovate the castle and the 250 acres of park and woodland. It is hoped to open the main building eventually to visitors as part of a full restoration programme.

The National Heritage Memorial Fund (NHMF) was set up in 1980 to save the most outstanding parts of our national heritage, in memory of those who have given their lives for the UK. It will receive £5 million of Government grant in aid in 2018/19 www.nhmf.org.uk.