Sir Alfred Gilbert's exceptionally rare white marble bust of Queen Victoria as an ageing monarch has been 'saved for the nation' after the Fitzwilliam Museum raised the £1.2 million asking price to prevent it being exported to the Metropolitan Museum of Art in New York. 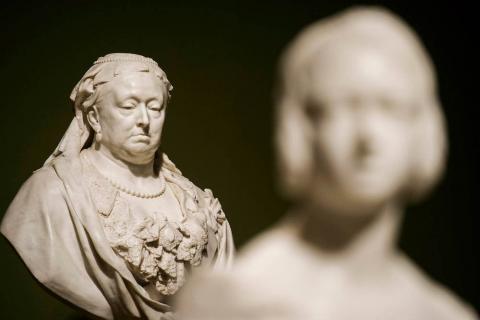 The powerful sculpture of virtuoso carving is perhaps the most impressive portrait ever made of the elderly Queen-Empress.

The Fitzwilliam devoted the recent Hartley-Johnson Bequest, to this important acquisition.  The Fitzwilliam are also grateful to the National Heritage Memorial Fund (NHMF) who generously grant aided the balance, £267,607.  The bust will now join the distinguished permanent collection of the Fitzwilliam Museum and be on public display in its galleries.  It is the last acquisition for Tim Knox, Director of the Royal Collection.

Sir Alfred Gilbert, (1854-1934) was the most brilliant and talented sculptor of his age, transforming British sculpture at the end of the 19th century.  He is best known for the Shaftesbury Memorial, 'Eros' at Piccadilly Circus and the magnificent tomb to Prince Edward, Duke of Clarence, in St George’s Chapel, Windsor.  His remarkable depiction of Queen Victoria towards the end of her life was sensitively carved, between 1887 and 1889, to reflect a range of textures - the monarch’s ageing skin, lace, jewels and her meditative expression. Gilbert rarely worked in marble; most of his sculptures are in bronze, making this piece even more exceptional.

While the bust is highly realistic with soft swirls of cloth around the head and shoulders Gilbert, did not work from sittings with the monarch but from a bronze full-length figure of Queen Victoria and from photographs, using his own mother as a model for the drapery, saying at the time: “One was Queen of my country – the other Queen of my heart.”

The Army and Navy Club commissioned the bust to celebrate the Golden Jubilee of Queen Victoria’s Coronation in 1887. It was commissioned as a celebration of her reign and the loyalty of the club. The club remarked, ‘this is a work of great accomplishment for which Gilbert was rightly renowned and which clearly conveys the regal bearing of the Queen while also showing the delicacy of fine and sensitive detail.’

The decision to defer the export licence followed a recommendation to the DCMS in 2017 by the Reviewing Committee On The Export Of Works Of Art And Objects Of Cultural Interest (RCEWA) who objected on all three of its Waverley criteria.  RCEWA member Lowell Libson explained at the time, “Sir Alfred Gilbert, a leading but mercurial light in the British ‘New Sculpture’ movement, is now regarded as one of the greatest European sculptors of the period.  This monumental portrait bust of the Queen-Empress is not only an important icon made at the apogee of British power but a complex and hugely sympathetic image. It is also a tour de force of marble carving, a medium which Gilbert rarely employed.”

'Sir Peter Luff, Chair of NHMF, said: “A monarch who defined one of the most important eras of British history, captured by one of the era’s leading sculptors – that’s what makes this bust of Queen Victoria by Sir Albert Gilbert so special. Its loss from these shores was unthinkable and that’s why the National Heritage Memorial was so pleased to be able to step in with the final piece of funding, ensuring remains in the UK for future generations to study and enjoy”

About the Fitzwilliam Museum

Founded in 1816 the Fitzwilliam Museum is the principal museum of the University of Cambridge and lead partner for the University of Cambridge Museums (UCM) Major Partner Museum programme, funded by The Arts Council. The Fitzwilliam’s collections explore world history and art from antiquity to the present day. It houses over half a million objects from ancient Egyptian, Greek and Roman artefacts, to medieval illuminated manuscripts, masterpiece paintings from the Renaissance to the 21st century, world class prints and drawings, and outstanding collections of coins, Asian arts, ceramics and other applied arts. The Fitzwilliam presents a wide ranging public programme of major exhibitions, events and education activities, and is an internationally recognised institute of learning, research and conservation.