Campaigners are celebrating after securing enough money to save ancient jewellery believed to be the earliest example of Iron Age gold ever discovered in Britain. 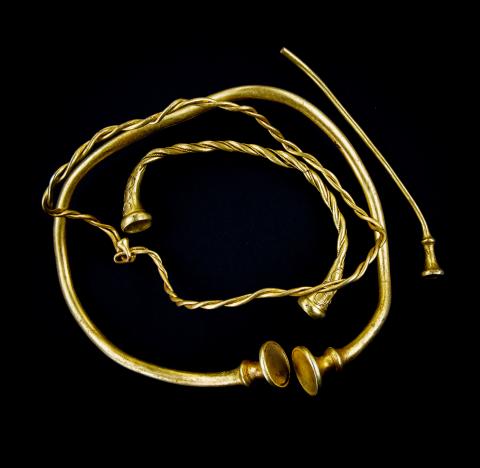 Four exquisite artefacts that make up the Leekfrith Iron Age Torcs can now go on permanent display at Stoke-on-Trent’s Potteries Museum & Art Gallery after a successful campaign to raise the £325,000 needed to buy them.

The four torcs are jewellery consisting of three necklaces and a bracelet. Experts believe they date back to around 400BC. They are thought to be from the continent, possibly Germany or France, and would have been worn by important women in society.

The artefacts were discovered in Leek last Christmas. They were reported Treasure via the British Museum's Portable Antiquities Scheme based at Birmingham Museum. Archaeologists from the city council and Staffordshire County Council supported site investigations on the land. They were carefully examined by experts at the British Museum and declared treasure at an inquest hearing in February. The torcs were put before the national independent Treasure Valuation Committee, where a panel of experts had the difficult task of putting a value on ancient items never before seen in this country.

Donations from members of the public and major support from funding bodies as well as trusts and local businesses have been flooding in since the campaign was launched in September.

And just last week, generous grants of up to £165,000 from the National Heritage Memorial Fund (NHMF) and £80,000 from Art Fund took the total raised to its target. This follows on from a £40,000 grant fund provided by Arts Council England and managed by the Victoria and Albert Museum, and £25,000 from The Headley Trust – one of the Sainsbury Family Charitable Trusts – received in November.

Sir Peter Luff, Chair of NHMF, said: “The Leekfrith Torcs are absolutely exquisite.  The trustees of the National Heritage Memorial Fund had the privilege of seeing up close the craftsmanship of these mysterious pieces of jewellery pulled from the Staffordshire soil. They offer so much insight into a period of our history we know little about and we felt it imperative they should be saved so everyone has the opportunity to see them.”

The ancient treasure captured the public imagination – and global media – when they were unveiled for the first time at The Potteries Museum & Art Gallery, located in the city centre, in February. They went on to attract 21,000 visitors in just one month, and were also viewed by Prince Charles and the Duchess of Cornwall when they visited the city in November.

The city council, in partnership with the Friends of the Potteries Museum & Art Gallery – which was leading the public fundraising campaign on behalf of the museum – had until 5 January to meet the valuation price, or risk the artefacts potentially being separated out and sold to private bidders.

Chairman of the Friends of the Potteries Museum & Art Gallery, Ian Lawley, said: “It is excellent news that the final piece of the funding jigsaw has fallen into place. The campaign to save these beautiful objects caught the imagination of the public and we would like to thank everyone who contributed to the appeal.

“As well as these major grants, we were thrilled to receive many generous donations from individuals and groups. Fittingly, these included the Goldsmiths’ Company, one of the City of London’s ancient livery companies.”

Councillor Anthony Munday, the city council’s cabinet member for greener city, development and leisure, said: “We are so grateful to the National Heritage Memorial Fund and to Art Fund for helping us to make this fundraising campaign a success.

“Their generosity has ensured an important part of our city’s culture and heritage will be freely accessible for all to see and admire once the gold is back on permanent display at the Potteries Museum & Art Gallery, and I’d like to say a huge thank you to them and to everyone else who has helped to make this possible.

“I’d also like to express my immense gratitude to the Friends of the Potteries Museum & Art Gallery as well as to Keith Bloor and his team at the museum, who have worked tirelessly towards this very important cause.”

Philip Atkins, leader of Staffordshire County Council, said: “Staffordshire is extremely fortunate to have been the home to both the Staffordshire Hoard and now the Leekfrith Torcs. It will be fantastic to see them return for everyone to enjoy, appreciate and learn from for years to come.”

The four gold artefacts are currently on temporary display at the British Museum in London.

Julia  Farley, British and European Iron Age curator, British Museum, said: “Learning about the discovery of the torcs last year was like an unexpected early Christmas present. This year’s news is even better.

“I am beyond delighted to learn that funds have been raised for the Potteries Museum & Art Gallery to acquire this incredible find. This fabulous gold jewellery is of international importance, shedding new light on the relationship between Britain and Europe over 2000 years ago.

“It is very fitting that it should be displayed in Staffordshire, close to where it was discovered, since the find has transformed our understanding of what life was like in this part of Britain before the arrival of the Romans.”

More details about when the Leekfrith gold will return to the Potteries Museum & Art Gallery will be released at a later date, but it is hoped that arrangements can be made for it to return at the beginning of next year.

As well as hundreds of public donations, a number of major fundraising bodies have contributed to the campaign to save the torcs. These include:

We are using the hashtag #leekgold for all social media posts related to the campaign, if you could do the same please. The four gold artefacts are currently on temporary display at the British Museum, but hi res photographs of them are available on request.

For more information about how the gold was found, go to http://www.staffordshirenewsroom.co.uk/staffordshire-strikes-gold-with-iron-age-find/

Under the Treasure Act (www.finds.org.uk/treasure) finders have a legal obligation to report all finds of potential Treasure to the local coroner in the district in which the find was made. The success of the Act is only possible through the work of the Portable Antiquities Scheme, advising finders of their legal obligations, providing advice on the process and writing reports for coroners on Treasure finds.

The Act allows a national or local museum to acquire Treasure finds for public benefit. If this happens a reward is paid, which is (normally) shared equally between the finder and landowner. Interested parties may wish to waive their right to a reward, enabling museums to acquire finds at reduced or no cost. Rewards are fixed at the full market value of the finds, determined by the Secretary of State upon the advice of an independent panel of experts, known as the Treasure Valuation Committee.

The administration of the Treasure process is undertaken at the British Museum. This work involves the preparation of Treasure cases for coroners’ inquests, providing the secretariat for the Treasure Valuation Committee, and handling disclaimed cases and the payment of rewards.

For all media enquiries please contact Laura Webster in the Communications Department at Stoke-on-Trent City Council on 01782 232265.