Rare and beautifully illuminated example of early medieval luxury book production in London acquired by the British Library for £775,000. 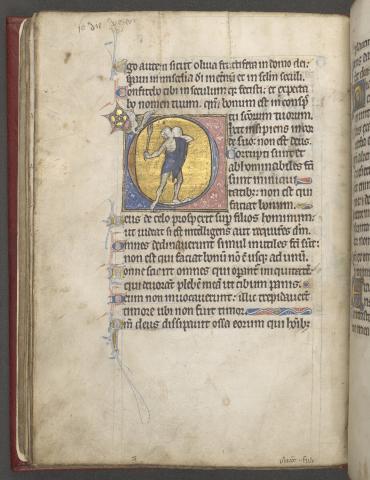 Page from the Mostyn Psalter-Hours

A rare and beautiful Psalter – a volume of psalms – produced in 13th-century London has been acquired by the British Library. The Mostyn Psalter-Hours was acquired for the nation with a grant of £390,000 from the National Heritage Memorial Fund (NHMF) and funding from other generous supporters.

The book includes a calendar, decorated with twenty miniatures of the labours of the months and the signs of the Zodiac, and a Psalter with eight of the original ten large historiated initials, the Hours of the Virgin, and the Office of the Dead.

The manuscript can be identified securely as having been produced in London, and is one of relatively few surviving examples of luxury books known to have been made in the capital during the medieval period. Its calendar features a sequence of London saints – including the seventh-century bishops of London, Melitus and Erkenwald – and the feast of the translation of Edward the Confessor in Westminster in 1269.

The manuscript’s original patron is unknown, but its high quality illumination – where text sits alongside highly decorative letters and illustrations - indicates that it was made for an important individual – possibly a bishop, as an image of a bishop appears in the illustration for Psalm 101, which is where a donor portrait might be expected.

Kathleen Doyle, Lead Curator, Illuminated Manuscripts at the British Library, said: “The Mostyn Psalter-Hours is an outstanding example of English illumination of the highest quality and represents a crucial piece of evidence for the history of English painting. Because the manuscript is localised to London, it is a critical focus around which to group other manuscripts – of Psalter texts and others – in a Westminster/London context, and to compare with books made in other centres. The addition of the Mostyn Psalter to the British Library’s collections will facilitate identification of London-based scribes and artists in other manuscripts. Similarly, the representation of the possible patron within the book will also help shed light on the process of creating such luxury books.”

The purchase price of the manuscript was £775,000 and was supported by a contribution of £390,000 from the NHMF, along with support from the Art Fund, Sir Siegmund Warburg’s Voluntary Settlement, the late Bernard Breslauer, the Friends of the British Library, and the Friends of the National Libraries.

Sir Peter Luff, Chair of NHMF, said: “The Mostyn Psalter-Hours is quite simply exquisite. What makes it particularly special is that we are able to trace its production back to 13th-century London and with just a few luxury books produced in the capital during this period still remaining, it’s a rare survival. The National Heritage Memorial Fund was set-up to save the UK’s most precious heritage at risk and so we felt it imperative this treasure should be safeguarded for future generations to study and enjoy.”

Scot McKendrick, Head of Western Heritage Collections, said: “We are hugely grateful to the NHMF and for the generous support of all the other funders, for making this important acquisition possible. The British Library holds the world’s largest collection of medieval English Psalters and current and future generations of scholars will be able to study the Mostyn Psalter-Hours alongside other notable examples from the period.”

John Glen, Minister for Arts, Heritage and Tourism, said: "This important 13th-century manuscript, one of only a few surviving from the Medieval period, was produced in London so it is fitting that it will now go on display at the British Library. I am pleased that this rare work has been saved for the nation through a generous  donation from the National Heritage Memorial Fund and that the manuscript will be digitised and available for all to enjoy."

For further information, images and interviews, please contact Ben Sanderson at the British Library on 01937 546126 or ben.sanderson@bl.uk

The British Library is the national library of the United Kingdom and one of the world's greatest research libraries. It provides world class information services to the academic, business, research and scientific communities and offers unparalleled access to the world's largest and most comprehensive research collection. The Library's collection has developed over 250 years and exceeds 150 million separate items representing every age of written civilisation and includes books, journals, manuscripts, maps, stamps, music, patents, photographs, newspapers and sound recordings in all written and spoken languages. Up to 10 million people visit the British Library website – www.bl.uk – every year where they can view up to 4 million digitised collection items and over 40 million pages.

The Broughton Missal, an extremely rare medieval manuscript containing the text and music needed for church services, has been purchased for Lambeth Palace Library
Read more